The mighty Santisima Trinidad was by far the largest and most powerful vessel of the Age of Sail. Bring this behemoth to your Black Seas Spanish Fleet.

The Santisima Trinidad (officially named Nuestra Señora de la Santísima Trinidad) was a Spanish first-rate ship of the line. This number of guns increased over the years. At launch in 1769, she had 112 guns, though this number gradually increased. between 1795 and 1796 she was upgraded to 130 guns, and in 1802 this number was increased to 140. Following this last rebuild, she was the heaviest armed ship in the world, bearing more guns than any other ship in the Age of Sail. Effectively, however, the fourth gundecks guns were comparatively small.

This armament was not without its problems. The weight of the additional weaponry rendered her a particularly poor at sail, leading to the ultimately rejected suggestion that she be restricted to the defence of the Bay of Cadiz. She remains notable as one of the very few 4-decked ships ever built.

IN SERVICE
Santisima TrinidadThe Santisima Trinidad was involved in the American War of Independence, when Spain declared war on Britain in 1779, participating in such actions as the Great Siege of Gibraltar and the Battle of Cape Spartel. She acted as the flagship of Teniente General José de Córdoba y Ramos, the Spanish commander, at Battle of Cape St Vincent on 14 February 1797 in which she suffered heavy damage and only narrowly escaped British capture. An extraordinary feat considering she had lost both masts and half her crew. She even struck her colours, but the British did not capitalize.

Eight years later, after undergoing repairs at Cadiz, she was the flagship of Rear Admiral Baltasar Hidalgo de Cisneros at the Battle of Trafalgar as part of a combined Franco-Spanish fleet. She was particularly ineffective in the light winds of the day due to her vast bulk, and her position in the line made her a ripe target for the British fleet. She eventually surrendered to HMS Neptune, a 98 gun second rate ship-of-the-line. Though taken in tow following the battle, the ship was scuttled near Cadiz.

IN BLACK SEAS
The vast bulk of the Santisima Trinidad is alluded to with its special rules in Black Seas – she is only ever able to make a single change of direction during her activation. She also requires a successful skill test to be able to travel at full sails.

The trade-off for this deficiency is an arsenal that dwarfs any other ship in the game. Any vessel unfortunate enough to be caught in the broadside is sure to be shredded. You’ll want to capitalize on this as best you can, unleashing your initial broadside (which conveys additional bonuses) at the optimal moment. 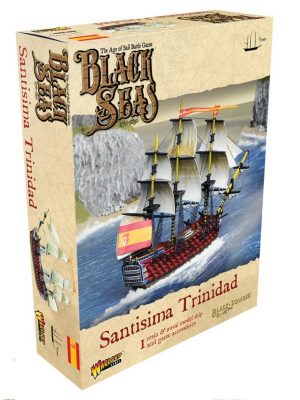