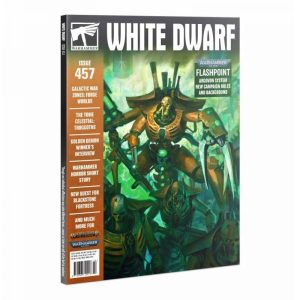 Here’s what you can look forward to in October’s issue:

Worlds of Warhammer
Jordan Green talks about funny stuff. Like orruks, troggoths and decapitation. Well, maybe not that last one.

Outside the Studio
We talk about the models we’ve painted and the games we’ve played while stuck in a pandemic lockdown.

The Scenes of Battle
Veteran hobbyist Gareth Etherington takes us behind their camera to talk to us about taking pictures of his miniatures.

The Monster Slayer
Slayer Sword winner Maxime Penaud talks about his winning entry (and more besides) from 2019.

The Terminus
A mysterious train beckons the desperate in this story by David Annandale.

Warhammer 40,000 Flashpoint: Argovon System
Flashpoints are collections of articles that explore a particular region or war zone at a specific point in time. Flashpoints contain new rules for you to try out on the battlefield, plus new stories and background about the setting, giving you plenty of opportunities to theme your games. You could recreate some of the battles mentioned in the background section, convert characters, based on the heroes in the stories or build a new battlefield to represent one of the Theatres of War. Flashpoints span multiple issues, and articles are always marked with the Flashpoint’s symbol, making them easy to find in your copy of White Dwarf.

Argovon Campaign: The Background
A new war zone has opened up in the Pariah Nexus. But can the Imperium regain its lost ground?

Argovon Campaign: The Rules
New rules for fighting a campaign in the Argovon System, including new Theatres of War and Agendas.

Galactic War Zones: Forge Worlds
Power up your mechadendrites, because this month’s painting and modelling article is all about forge worlds.

Echoes from the Warp
Write an army list. Play a game. Learn from your mistakes. Repeat. Elliot Hamer joins us to talk about trial and error.

Faith & Fire Part VII
Things come to a head on Neva as Miriya and Verity find themselves on the hunt for Lord Deacon Viktor LaHayn.

Men Of Metal
Technoarcheologist Daedalosus is on a quest to discover how the Spindle Drones work. He gets more than he bargains for in this new quest.

The Dust Falls Campaign
We delve into the world of open play campaigns, where stories are told and rules are there to be broken. Plus, loads of great-looking warbands!

The Tome Celestial: Troggherds of the Realms
It’s all a load of troggoths when you come to think about it. New background and rules for the realms’ dimmest inhabitants.

Army Showcase: Glogg’s Megamob
Age of Sigmar overseer Jes Bickham shares his army of troggoths with us. They’re all purple, you know!

Rules of Engagement
Jervis makes a point about points in this month’s point-related piece.

Glory Points
John Bracken has taken over the Warhammer Underworlds column this month to talk about Arena Mortis!

The Beasts Within
Morgwaeth and the Daughters of Khaine come face-to-face with a dangerous foe in this short story by Phil Kelly.

Path to Victory
Evicted from Glory Points by John, Dave Sanders has penned his own tactics guide for Beastgrave’s two latest warbands.

The Pale Orc Cometh
A whole heap of tactics for using Azog the Defiler in your Middle-earth Strategy Battle games.